In the dimly lit shadows of the Winn-Dixie carpark, the Crows gather around the boot of Ivan’s car. A staked 'Green Station Wagon Driver/SMS guy' in the boot.

Real whispers? Mouths? It is more visible than audible. Finger to his lips, a partial gesture to back up, an indication to new the trio.  "Follow him, you’ll find Carl."

Ivan locks the passenger doors of his car and backs up. All but Real melt into the shadows.

Real quietly pops the boot and, biting his wrist, hisses softly as he smears a small amount of blood across the captive’s lips. "Quick, get out of here while you can. Tell Carl he owes me." and removes the stake. The vampire, looking confused, hungry and hunted tumbles out of the boot. Dragging himself up he hesitates, not sure if it’s safe to run or not. Realising he has no choice, he lurches to the outer edges of the car park where he is overcome by the beast and reduces a nearby vagrant to a pallid husk. As his hunger abates, he staggers back overwhelmed with grief and shame at his actions. Now as scared of himself as he was of his captors, he races from the scene towards the intertown bus stop. Activating celerity Ivan and Lucinda race silently after him, his goal soon becoming clear to them.

Knowing he would be unable to keep up, Hanzo chooses to remain with Ivan's locked car, but the other crows do not reemerge from the shadows.  Ivan, returning for his car, collects Hanzo and heads for the highway.

As Lucinda watched, their quarry attempted (unsuccessfully) to tidy up a little before boarding the bus. Desperate to stall them for as long as she could, she too boards but plays dumb about the fare. When pressed she spills ample coins over the floor in a last-ditch attempt to gain more time. The frustrated bus driver closes the door and drives on with them both while Lucinda, blocking the doorway, collects the spilt coins. In the light GSWD easily recognizes her. Unwilling to risk breaching the masquerade, as soon as the bus crosses the river to more neutral turf, he slips off through the rear exit. Lucida is still 'collecting spilt coins' and arguing with the driver when he alights. seeing this she hurriedly pays her fare, declaring “She must be let off this bus immediately!” the driver gladly deposits her at the next stop – a block up the road, Lucinda rushes back, anxious to find him.

Ivan and Hanzo turned onto the highway to see the bus pulling away from the stop with both GSWD and Lucinda clearly visible through it's well-lit windows. Without hesitating, Ivan accelerates hard deftly catching up to and trailing the bus. Seeing the bus pullover and their target exit, Hanzo slips out and into the shadows to quickly follow, leaving Ivan to find and recover Lucinda. Hanzo cuts through between dark office buildings towards Bayfront Park. Queueing for the Miami Beach bus with GSWD, He takes the opportunity to furtively touch the Vampire and attempt to focus on his own blood and call the dagon.

After waiting in Ivan’s car for about 15 minutes Ivan and Lucinda realise that neither of them have Hanzo’s phone number (or even last name). They have no way of contacting him. Hoping the Crows have a solution, Ivan texts Real with an updated location and informs him that Hanzo is currently trailing their quarry.

Hanzo tails GSWD all the way to a nightclub opposite Lummos park in Miami Beach. Still hiding in the shadows, Hanzo follows GSWD into the club where he finally sights Carl sitting in a far corner booth with a couple of women.

Hanzo texts Ruth (the only number he has) with Carl’s location. Real forwards it onto Ivan and Lucinda, who drive straight over -thankfully this early in the morning the drive can be managed in about 10 minutes…Ivan, bored of waiting, manages a comfortable 9. Hanzo sees Lucinda and Ivan appear at the door to the club.

It was obscenely rich and decadent. Red leather and neon with laser lights slicing through the air dancing with the heaving crowd and thumping bass. Bottle girls leaning over private tables stripping every last dollar off their clients. 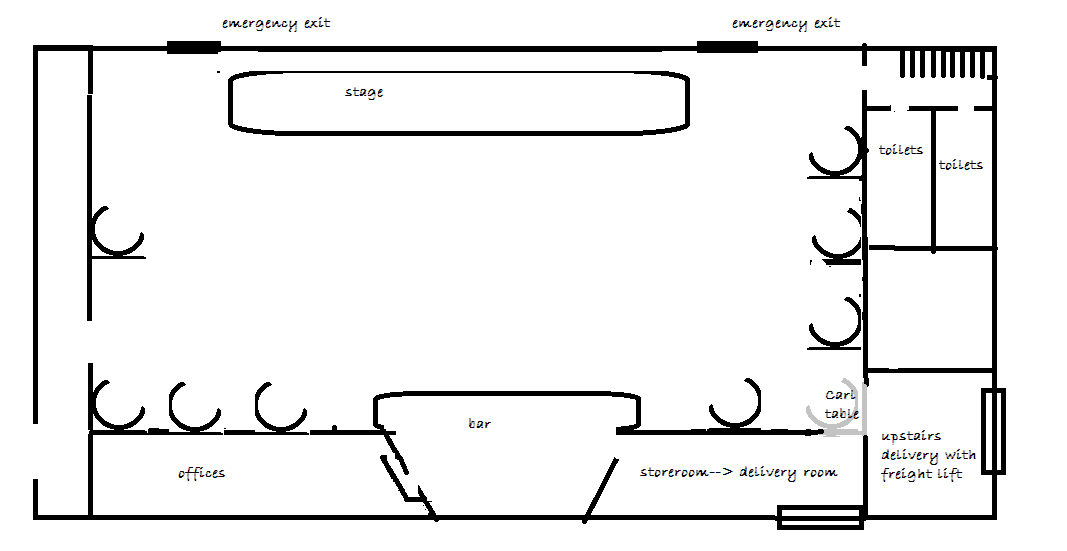 Scanning the crowd they locked eyes with GSWD who immediately informed Carl of their arrival. Ivan melts into the crowd as Carl highlights them to the bouncers at the door. Three bouncers swiftly block Lucinda path, requiring her to leave. Even as she protested they picked her up and removed her -face first onto the concrete outside. Lucinda recovers, activates celerity and fires two shots at the backs of the departing bouncers. The sound triggers chaos and panic on the streets, Lucinda doesn't notice -she watches them quickly heal from the hit in as the third bouncer turns and sends her back to the ground with a right hook. The bouncers return to the innards of the club while Lucinda lays there in shock and disbelief. She needed better ammo.

Hanzo, still concentrating on calling Dagon notices Ivan maneuvering around towards GSWD and Carl. Carl sees the bouncers return and stands; wavering slightly. Running with, and now from, the Sabbat was taking its toll. Almost bemused, he led the group over to the far side of the bar.

Hanzo triggers the call (with no noticeable effect) then slips over the bar in front of them and into the delivery room beyond. Ivan follows the foursome but is blocked again by a bouncer…maybe a personal security detail? Ivan dominates the bouncer saying that Carl’s life is in danger. The bouncer follows after Carl determined to save him, Ivan follows after the bouncer.

Lucinda stands up, brushes herself off ignoring the stares of scared but curious bystanders and their phones. She walks around the side of the building looking for another way in and spies a roller door.

Carl, then 'GSWD' and the two women, walk past Hanzo. As Carl presses the button to open the roller door, Hanzo uses quietus. The surrounding area goes silent like someone pressed a ‘mute’ button, just as the bouncer shoots the garage door mechanics to stop Carl from walking into danger. Ivan rushes in for the attack, shooting for the knee as Carl climbs under the door.

'GSWD' grapples Ivan while the women run off silently screaming in terror. Sinking his teeth into 'GSWD' Ivan barely gets three blood points before he is shaken off. Lucinda fires her shotgun encountering a repeated ammo fail (These bullets are useless?!) as Carl runs past her toward the main road. Ivan rolls under the door after Carl, dodging 'GSWD’s fresh attempt to maul him. GSWD and Hanzo follow.

Lucinda chases Carl to the main street where he lunges at her before attempting to escape in a car. Hanzo spits/vomits 2 litres of tainted blood on them sapping both Carl and Lucinda’s stamina. Lucinda once again fires -this time her shotgun leaves permanent damage on Carl.

Hanzo climbs to the roof of the club.

Ivan shoots at the vehicle (and with an amazing all crits roll) causing a cigarette lighter on the parcel shelf to explode. With the car being rapidly engulfed in flames and his arm alight, Carl frenzies and runs. So does everyone else, just as the police arrive.

Hearing the arrival of the police, Ivan turns to go but stares transfixed. It was beautiful. The fire, the chaos, the burning, the flashing lights. Struggling to gain control, he walks towards the police. Playing victim, he indicates there are four persons of interest back around the corner. As they look where Ivan points, Lucinda celerities out and drags the now toporus flaming Carl around the corner. She barely makes it around the corner before dropping him as the panic takes over. A block further on she regains control and feeds.

While one of the police moves towards Ivan to investigate, the other turns to call reinforcements. Ivan grabs the adventurous one, feeding and racing around the corner. Now freshly fed and confronted with Carl he rips off the still burning arm off the corpse and, taking the rest, goes to find a car.  Collecting a now fed Lucinda and a still silent Hanzo, Ivan texts Real ‘We have him’ Real replies ‘meet at Bishops’. It’s nearly Three am. Four hours remaining until sunrise.

There are no comments to display.